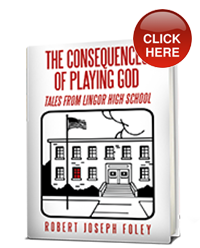 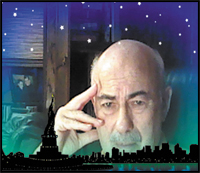 After having taught English and Drama for 34 years, on retirement, Robert Joseph Foley embarked on a new career – that of professional author.  Since 1997, he has written and published three works, all fully described in these pages.  “These Little Poems of Death and after Life,” sprang from his love of Robert Frost. The book attempts to revive the art of narrative poetry, which Foley believes has languished in recent years.  Following the success of his volume of poetry, he published The Consequences of Playing God: Tales from Lingor High, wherein he attempted to capture the spirit of the American High School in an extended exploration of the bureaucracy he encountered while teaching.  The book is largely satirical in tone, but it reflects the many harrowing, but true, happenings he encountered during his teaching career.  While often hilarious in its depiction of characters and situations, it ends with a standalone story that is prophetic.  “Little Sally Corey and Her Friends” takes us into the minds of adolescents bent on destroying the institution that is supposed to nurture them. Compared to Flannery O’Connor by one critic, Consequences is an admittedly dark book; yet, it pales compared to his newest work: A Little of This/A Lot of That, an absorbing collection of tales that does for organized religion what Consequences did for America’s school systems.  Promised in the near future is a novel that returns to the people Foley has greatest insight into, teenagers.  Watch for Saturday Night at Mulligan’s Stew and Brew, coming in the near future.

When not writing, Foley spends all of his time with friends and, most of all, family: wife, Betty; and children, Patricia and Robert and their families, which have rapidly grown into a new  generation..  Together, they enjoy travel, good food and good times, music, literature, art and theatre; and mostly, the joy of being a close knit family, there for each other in times, bad and good.